Babies can't tell us how important chiropractic is for their health and wellness, so let's listen to what their mothers are saying. A survey of mothers whose infants received chiropractic care reveals high levels of satisfaction relative to improvements in infant behavioral issues such as feeding problems, excessive crying, sleep issues, problems with supine sleep position (on the back; the recommended position to minimize SIDS risk), time performing prone positioning (on stomach; an important position for developing early motor skills) and restricted cervical (neck) range of motion.

On average, mothers reported two problems affecting their child at the first visit, and took their infants (80 percent of whom were 12 weeks of age or younger) to the chiropractor approximately 3-4 times during the study period. Overall, mothers were overwhelmingly satisfied with the impact chiropractic care had on their infants: 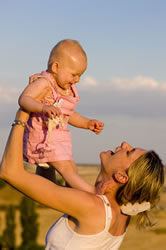 More than 80 percent reported definite improvements on a global impression of change scale. 91 percent rated their satisfaction with care received as an eight or higher on an 11-point scale.
95 percent felt the care provided by the chiropractor was cost-effective.

What's more, maternal ratings of depression, anxiety and satisfaction with motherhood also improved during the study period. In other words, healthier baby, healthier – and happier – mother!

Published in the Journal of Manipulative and Physiological Therapeutics, this was no small study, with nearly 1,100 mothers completing both intake and follow-up surveys. So take the researchers' findings to heart: "The infant's care was reported by the mothers who completed follow-up as effective, safe, and cost-effective." Now that's a ringing endorsement for the power of chiropractic.