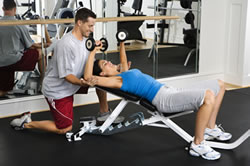 If you're trying to become physically stronger, you may be interested in the results of current research that suggests the place to begin is to implement weight training along with added protein in your diet.  A scientific review which was published in the British Journal of Sports Medicine compiled the results of studies focused on weight training and protein.

This review concluded that, although there is a limit to the benefits of added protein, eating more protein can significantly enhance  the effects of lifting weights, especially for people past the age of 40.  Any form of protein is likely to be effective, not just high-protein shakes and supplements. Beef, chicken, yogurt and even protein from peas or quinoa could help build larger and stronger muscles.

It makes sense that protein in our diets should aid in bulking up muscles since muscles are mostly made up of protein.  The idea of weight lifting is to stress the muscles and cause a very small amount of damage to muscle tissue. The muscle tissue then makes new proteins to heal the damage. But muscles will also consume any additional proteins floating around in the bloodstream. Therefore, bodybuilders may drink large amounts of protein-rich shakes after workouts with the expectation of adding greater bulk to their muscles.

However, for the average person, the advantages of added dietary protein have not been as clear. Past studies have indicated that, overall, people will gain more strength and muscle mass while weight training if they increase their intake of protein. But many of those studies have been relatively small or short-term and have often focused on only one group of people (such as young men or older adults) or one kind of protein (such as whey shakes or soy).

Questions about whether everyone experiences the same benefits from consuming added protein while weight training have not been answered.  In addition, just how much protein is ideal, what type of protein, and when it should be eaten are still up for debate.

Researchers from McMaster University in Hamilton, Ontario and other institutions decided to aggregate the results from the best past studies of weight training and protein. Using databases of published research, they looked for studies of at least a six-week duration that  included a control group and carefully tracked participants’ protein intake as well as the impacts on their muscle size and strength.

They compiled 49 high-quality past experiments that had studied a total of 1,863 people which included men and women, young and old, and experienced weight trainers as well as novices. The sources of the protein in the different studies had varied, as had the amounts and the times of day when people had consumed protein.

After researchers added all of the results together, they concluded that men and women who ate more protein while weight training had indeed developed larger, stronger muscles than those who did not. Almost everyone who started or continued weight training became stronger, but those who increased their protein gained approximately 10 percent more strength and about 25 percent more muscle mass compared to the control groups.

An additional focus of the researchers was to determine the optimal intake of protein.  It turned out to be about 1.6 grams of protein per kilogram of body weight per day. In practical terms, that would amount to about 130 grams of protein a day for a 175-pound man.  However, beyond the 130 grams, more protein did not result in more muscle benefits. The current federal recommendations for protein is 56 grams per day for men and 46 grams per day for women.

Rob Morton, a doctoral student at McMaster who led the study, says “We think that, for the purposes of maximizing muscular strength and mass with resistance training, most people need more protein” than is advised in federal recommendations.  That advice is especially true for middle-aged and older weight trainers, almost none of whom were getting the ideal amount of protein in these studies. This group tended to show much smaller gains in strength and muscle size than younger people.

Researchers also determined that any type of protein was fine and could be consumed at  any time. The gains were similar if people  consumed  their protein immediately after a workout or in the hours earlier or later, and it made no difference if the protein was solid or liquid, soy, beef, vegan, etc.

Although the results of this compilation of studies showed benefits of weight training and added protein, researchers agree that more studies are needed to answer questions about whether adding more protein affects body weight or metabolism and, if so, what that means for health.